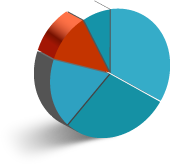 Since 2000, The National Sleep Foundation has commissioned WBA Research to conduct a national survey among adults in the United States. The audience surveyed varies, but the purpose of this large scale, nationwide survey in 2013 was to:

A total of 1,000 surveys were conducted. A representative sample was constructed with stratification by age and area of the country (Northeast, Midwest, West, and South) to determine the relationship between sleep quantity, sleep quality, sleep problems and physical activity. 500 surveys were completed via the Web and 500 via telephone interviews.

Using a self-reported measure of physical activity, for which respondents considered physical activity they did for at least 10 minutes in the past 7 days, participants were classified into four different activity levels: vigorous, moderate, light and no activity. This primary classification was used to contrast key sleep and sleep-health related variables collected in this 2013 Sleep in America poll.